Fantastic opportunity for builder and developers. This almost ready to build 9 SFH site is perfect for your next project. Most of the ground works are done. We are still ...

Need a turn key project that is ready to build? Logan Lane is a 9 unit fee simple site that is permit and construction ready. All of the utilities, roadways, (excluding ...

Breath in the quiet freshness of 5.4 acres of beauty. A sense of permanence emanates from this 1998 remodeled and expanded custom home and gorgeous landscape set seamless...

Your Dream Home Awaits You! Timeless architecture on this NW classic is perfectly set on a quiet street in the heart of Meadowdale, 4 beds w/ exec french door office w/ 2...

Builders and Investors look here!! Two tax parcels sold together for a total of .56 acres of all level and usable land. Located within the city limits of Lynnwood; water,...

This like new 2016 built home is nestled in a quiet culdesac on arguably the best lot in the neighborhood (check out yard, you'll see why). The open, yet flexible layout ...

Live life near the intersection to everything; this upbeat Alderwood location is the perfect position for living a full life. Quality built designed to accommodate those ...

Prime Lynnwood Real Estate 1/2 a block from HWY 99 property on CG zoning - General Commercial zone is to provide for a variety of commercial, retail, and other uses. Sell...

Prime Lynnwood Real Estate 1/2 a block from HWY 99 property on CG zoning - General Commercial zone is to provide for a variety of commercial, retail, and other uses. Sell...

Beautiful, spacious rambler in the Alderwood area, with 3 bedrooms, and 2 baths, with sauna in master bath. Easy living in this design, with deck off the master bedroom. ...

Found in south Snohomish County, Lynnwood is home to around 35,000 people and is a short drive north on I-5 from Downtown Seattle. Mountlake Terrace and Edmonds are other nearby towns that make up 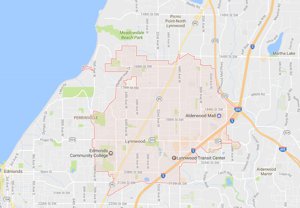 this mostly suburban area. Lynnwood is home to a large retail presence, serving not only residents of the city but also those from many surrounding areas. With its location being near to the interchange of I-5 and I-405, it is easy to reach many other points around the Puget Sound area when starting from Lynnwood.

Because the city lies outside of King County, and it is a little further north out of the big city than towns like Shoreline and Northgate, housing is somewhat more affordable in Lynnwood. The median home price of houses for sale in the area comes in at slightly over $300,000, which is significantly less expensive than it is close to the center of the metro area. Single family homes and apartments make up the majority of living arrangements for the residents of this city.

The Alderwood Mall is a notable attraction in the area, offering a variety of department stores and dining options. The mall is the largest one found in Snohomish County, so it draws people from all around the region to come visit. In terms of outdoor activities in the area, there is the Lynnwood Municipal Golf Course as well as Scriber Lake Park which both provide the city with green space among the development.

Lynnwood is in a great location to thrive for years to come because of its access to the major freeways and distance from the bigger cities of the metro area. It is a large enough city to have a relatively strong real estate inventory on the market at any given time, but buyers still need to act quickly in order to get the type of property they desire.