For those who are interested in buying real estate in a city that has an outstanding reputation, the City of Kenmore in Washington was recognized by Seattle Magazine. The magazine described Kenmore, located 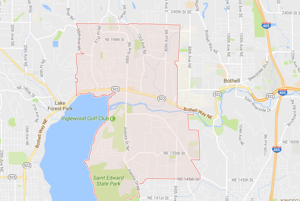 near the more well-known cities of Bothell and Inglewood as being number one in its search for the "Best Metropolitan Neighborhoods to Live In" and listed as "One of the Ten Best Towns for Families" by Family Circle Magazine.

The City of Kenmore

Kenmore is a small suburban city with a population of approximately 20,000 residents 58% of which are married couples and 35% of these are happily raising their families here. Those who live here love the quiet community feel of their small city and the proximity to amenities such as the Burke-Gillman Trail which runs right through the city.

In recent years the median income of those who choose to call Kenmore home has been increasing. As such the moderately sized homes for sale in the city have been steadily increasing in value. Realty offices continue to see a number of listings, yet the number of foreclosed on properties here is far smaller than in many other areas of Seattle.  Real estate agents tend to have very little problem finding buyers when one of the properties in this area comes up for sale.

Like many of the more exclusive cities in the Seattle area, Kenmore has placed an emphasis on maintaining the natural beauty of the area as much as possible. Because of this, there are a limited number of condos and apartments. The vast majority of real estate here is given over to single family homes.

Kenmore is considered to be one of the more approachable cities in the area as it boasts the country's biggest commercial air facility designed exclusively for seaplanes at Kenmore Air Harbor. It is also home to Bastyr University and a number of water parks as well as a freshwater port.

Homes for Sale in Kenmore

Top quality schools, friendly neighborhoods, and more can make this the perfect place to live. In recent years large swaths of what was once pasture have been converted into upper end housing developments in the northern part of the city, an act that is seen as the root cause of the upswing in the city into an affluent and upscale city from its former run down reputation.

Great home with wonderful neighbors in the Inglewood Golf Course community! Many originals make this a blank slate for your imagination. 2 upgraded units on same street r...

Welcome to Arrowhead Point. A secluded community of Waterfront and View homes. This property consists of two lots on the east hillside with views of Lake Washington and ...