The city of Bothell is located on the King-Snohomish County line, and is at the north end of what is considered the Eastside region. Bothell is home to more than 30,000 people, and is adjacent to Woodinville 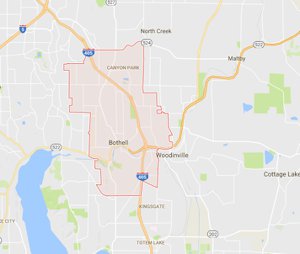 and Kenmore at the north end of Lake Washington. While many of the residents of Bothell work in other locations around the Puget Sound area, there are more and more business opportunities developing within the city – particularly in the medical industry.

The median price of homes for sale in Bothell is right around $500,000 making it slightly more affordable than many other Eastside locations. This is due mostly to the location of the city, being further north and a longer drive in to Bellevue and Seattle. However, this can be seen as a positive by many buyers who will enjoy the quiet setting as opposed to the busier cities to the south. The majority of properties in Bothell are single family homes although you can find condos for sale in Bothell as well.

Just to the east of the city itself is a satellite campus for the University of Washington, which is partly responsible for the growth of the city in recent years. Residents of Bothell have plenty of options for shopping destinations, as they can head south on I-405 to Bellevue Square, or around the north end of Lake Washington to reach Northgate in Seattle. At one time, Bothell laid claim to the tallest living Christmas tree in the world.

In a similar way to Renton on the south end, Bothell is located conveniently near major highways that connect many parts of the region. I-405 is the main north/south passageway, but there are plenty of options from the city to quickly explore other areas. Seattle is a short drive (depending on traffic), as is Everett and other north end cities.

MLS listings in Bothell show just how popular this city has become – prices have continued to rise and appear poised to do so for the near future at least. With easy access to the rest of the area, including the Eastside and all of its career opportunities, Bothell should remain a suburb that is in demand for years to come.

Meticulously maintained home with a custom walkway, river rock garden backyard with fountain. House is the only one with a walkout deck off master with views of a private...

Magical and perched up off the street, a home to fall in love with! Exceptional and special rambler on private cul-de-sac. Stunning 9,000+ sf lot and full of style and ch...

Welcome to the very desirable Pond community! This like-new house is ready for new owners. House features 3 bedrooms, 2.5 baths, and a total of 1,692sq ft of living space...

Located in an established neighborhood in the Westhill area of Bothell, this home has whimsical accents throughout. Step into the spacious foyer and you’ll immediately be...

Lots of windows and large skylights make this home airy and bright. This home has been carefully maintained and thoughtfully updated. Located on a cul-de-sac, partially f...

Welcome to 220 towns, a new community located in the heart of Canyon Park in Bothell. This band new end unit townhome features 4 bedrooms and 3.25 bath with tons of upgra...

Welcome to the very desirable Brookside Estates in the heart of Bothell! This pristine home is ready for new owners. Main floor features soaring high ceilings, a living r...

You've been through dozens of houses-but none of them felt like Home...Until now. Imagine pulling up to this park like well-maintained estate & leave the day's busyness b...

John Buchan resale! First time on the market since built, this home is ready for new buyers! Located in the very desirable Clairemont community in the heart of Bothell. H...

Welcome to the very desirable Pond community! This like-new house is ready for new owners. House features 3 bedrooms, 2.5 baths, and a total of 1,692sq ft of living space...

Welcome to 220 towns, a new community located in the heart of Canyon Park in Bothell. This band new end unit townhome features 4 bedrooms and 3.25 bath with tons of upgra...

Fantastic vacant building lot! Walking distance to downtown Bothell, easy commute to the East side, and quiet cul-de-sac make this a great place to build your dream home....

This like new elegant home is what you are looking for! Located in the desirable Parkview Ridge community, the beautiful home with modern finishes features open flow conc...

Northshore School District! This spacious home have it all; the big open kitchen, dining & living room is perfect for entertaining guests. Dining room steps out to the hu...

*** Beautiful, spotless, meticulously maintained 4-bedroom home in the sought-after "Park at creek side" community*** Some of the many features include: Sweeping vaults, ...

Welcome to the gem of Carlyle featuring a kitchen with professional Viking appliances, a large center island and cherry wood cabinets. See how the kitchen opens up to an...

Opportunity awaits to make this single story home your own! Located in the popular North Creek Park Community, this Home features 3 bedrooms, 1.75 baths and 1325sqft of l...

Hollyhills is the Eastside's best kept secret. This unbeatable location is on the Woodinville/Bothell border just a couple of minutes from the 405. This spacious 2BD/2BA ...

Montevallo in Bothell is Lennar's newest community of 85 homes, right in the heart of Canyon Park and the North Shore School District. This 3422 sq. ft. Gregory plan offe...

Simply adorable Timber Creek cottage located in the heart of this lovely neighborhood. A Toll Brothers build offers a great floor plan and charm. Enter the front door an...